Radio:
What's the biggest gaffe you have made on air: Too early to say!

Who is your radio hero: Chris Moyles

Who has been the biggest influence on you: A gentleman from Cardiff, Chris Macnamara

Most memorable radio moment: My first link, well, I remember the blur!

Who would you most like to interview or have as a guest: Sir Tom Jones

What is the first record you ever bought: Offspring – why don’t you get a job

Personal:
What makes you smile: The triplets

What makes you unhappy: Running out of mayonnaise

Apart from your current partner, who would be your ideal date: Scarlett Johansson

What did you want to be when you were a kid: An adult! A helicopter pilot

What's the worst job you've ever done: working for Audi

How do you spend your nights off: Game of Thrones at the moment

What would you most like to be remembered for: Always being happy

In one word, how would your best friend describe you: Chaotic

If you were to have surgery what would you have corrected: Leg extensions!

Tell us a secret about yourself: I have a tattoo you can’t see

In December 2016 Kirk featured in 'Behind the Mic' in the Canarian Weekly, here's what he had to say.....

END_OF_DOCUMENT_TOKEN_TO_BE_REPLACED 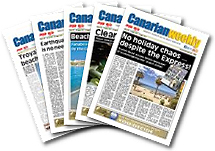